"The ruins of São Miguel das Missões in Brazil, and those of San Ignacio Miní, Santa Ana, Nuestra Señora de Loreto and Santa María la Mayor in Argentina, lie at the heart of a tropical forest. They are the impressive remains of five Jesuit missions, built in the land of the Guaranis during the 17th and 18th centuries. Each is characterized by a specific layout and a different state of conservation." - https://whc.unesco.org 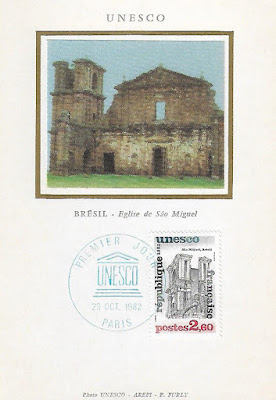 Thank you so much, Jean Pierre for this UNESCO postcard
with stamp issued in France!
I must be very interesting to visit the UNESCO Headquarters in Paris. ^-^
(UNESCO has issued its own stamp since 1961---which can be used in mails posted from UNESCO Headquarters or Maison de l'UNESCO at
Number 7 Place de Fontenoy in Paris, France)
﻿
Posted by Jan at 9:32 AM

Should you want to help me complete my collection, just leave a message OR you can send me a postcard of my missing sites and I will send you a card back!

Thank you so much!

VISIT MY OTHER BLOG FOR MORE POSTCARDS RECEIVED! Click below...

MY OTHER RECEIVED POSTCARDS 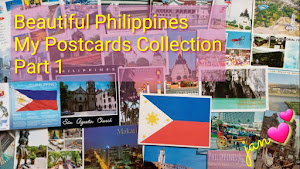